skip to main | skip to sidebar

Narinderjit Singh comes from a family of business men and horse breeders -- one of the wealthier families in Amritsar, the comely capitol of Punjab.  His horses are the color of powdered sugar.  The breed is called Nukra, the kind of horse grooms ride to meet their brides.  A proper Sikh, Mr. Singh wears a turban over his uncut hair and takes good care of his family.  He spent many years abroad in the United Kingdom, the United States, and the Middle East, but eventually his ancestral home beckoned him with a voice too yearning to ignore, and he's returned to Amritsar for good to spend his days in a tiny palace he inherited from his grandfather under the condition he was to never sell it.  He leases part of the estate as a cantina and rents the grounds for events.  Birthdays and weddings.  All Summer long people come by the hundreds to pay 100 rupees and swim in one of his three pools.  He breeds his horses and makes enough to live more than comfortably.  He has rooms enough to run a successful hotel, but instead, he offers his room for free to travelers to Punjab.  He is commissioned by the state as a cultural ambassador to foreigners, and he uses Couch Surfing as a means to reach these travelers   That's how I came to enjoy the company and care of the good Narinderjit Singh.

Amritsar is the holiest place for the men and women of the Sikh faith, as it's the home of their holiest and oldest texts, the original hymns of Guru Nanak.  The enscriptions are enshrined by day under a shroud in the famous Golden Temple, a place of worship in the center of a tremdnous pool of water.  Known as the pool of nectar, pilgrims travel for days to was away their sins.  The pool is also where Amristar derives its name.  Guests wash their feet in shallow canals before passing the entrance to a lovely color palate: the white of the complex between the blue of the sky and water, the piercing gold floating in the midst of it all, and bright sprinkles cupcake sprinkles of the many colored fabrics of the pilgrims.  Ethereal hymnals spill out of the loudspeakers, the sung verses of Nanak's prose. 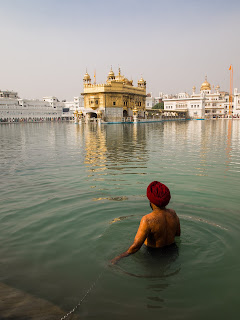 Guru Nanak preached equality and inclusivity, and these sentiments are manifest in the temple complex itself. Open 24/7 and free of entry charge, the temple welcomes all.  Sikhs reject the caste system, and people of all walks sit on mats as equals in the temple's cafeteria.  In my case, naan, dahl, and rice pudding were served to everyone else, gratis.  A polite donation box is placed outside the exit.

The complex is large and meets the needs of its thousands of worhippers with surpsing efficiency -- congestion only becomes dense as you join the throng on the bridge to enter the temple. If the bridge is full, the wait can be an hour long, but it's well worth the time. The gold leafing, the fabrics, and decor alld emand a closer look, and what a lovely surprise: the hymansl on the loudspeaker aren't recordings, but here in th Golden Temple are old bearded Sikhs, singing and playing into the microphones with no notation and without pause. 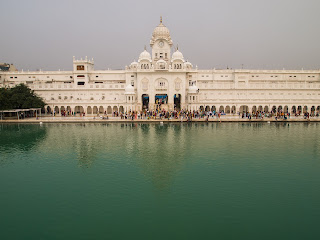 The second biggest tourist attracgtion in Amritsar is called Matthew Linzmeier.  Many of the pilgrims came from parts of India well away from the tourist circuit, and so the color of my skin and cut of m y clothes were anotlty to them.  Indians here often beg for photos and it's hard to tell if they want to take a photo of you, with you, or if they want you to take of a photo of them.  In all cases, I am happy to oblige, but it did once get to the point where pilgrims were getting in a line to have their photo taken with me. 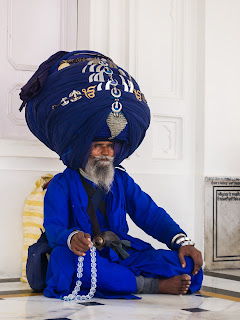 Near the Gold Temple is Jallianwala Bagh, a clearing where an English officer infamously ordered his men to unload thousands of rounds into unprovoking peaceful demonstrators.  Fleeing Punjabis leapt into a well, risking a great fall to avoid bullets.

My frantically tossed up new itinerary only permitted me a single day in Amritsar, but Mr. Singh insisted I stay another day.  He was right in saying I haven't enjoyed enough Punjabi food and company, but where he really won me over: "...and I am hosting a wedding here tomorrow.  You should really stay and enjoy."  Door closed.  Window opened.  How could I say no?

With an attendance between 200 and 250, this was actually a very small event for an Indian wedding. Guests were welcomed with sweetbreads and soda -- Thumbs Up Cola and Limka Lemon-Lime -- and Mr. Singh's  five and a half Punjabi dancers.

The groom arrived with fanfare upon a white stallion, both rider and steed bedecked with bright ceremonial garb. The groom bore a saber was ornamented with 100 rupee notes.  With scissors he approached the entrance to the estate where all the young single ladies created a barrier with a long strip of red fabric which he bravely cut before passing through.  I leave the symbolism of the act to you.

Then... the bride and groom left!  Mr. Singh explained to the surfers present that the couple went to temple for the actually ceremony, and that most of the guests remain behind to socialize.  Not wanting to miss the ceremony, I had him tie me a turban (heads must be covered in the temple) and I hustled over to where the ceremony was taking place.  It was mostly just hymnals followed by communion, the shared eating of some kind of sweet dough.

Things really got bumping after the bridal party returned.  A dance stage had erupted by the pool, and feigning reluctance, I let myself get dragged up to join the very manly fray (women didn't seem permitted to dance).  I can't think of a time I've been so swept away by the beat of a song; the energy of these dancers was infectious.  The Punjab dance standards had beats that tapped into the tribal urges of a man, but had melodies and composition that maintained the elegance of their heritage.  I tried to rip off moves from Tunak Tunak Tun and I let my style evolve as I watched the laughing and cheering dancers around me. 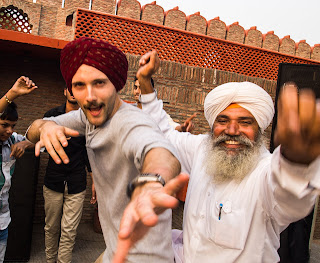 A stern Sikh with dark aviators and a neat turban that made him look like an oil tycoon approached me on stage with a look like he was going to berate me for making light of their culture.  And then he took out a stack of rupees and with a booming laugh he started to make it rain on the stage.  Children rushed onto the stage to collect the dropping Gandhi faced bills.

I danced until my chest hurt and my shirt was soaked.  After killing five glasses of water and pulling together a beautiful plate of channa masala, dahl, saag, something with cauliflower, and I don't know what else, I sat to eat, but couldn't get a bite in for all the people wanting to speak to me and learn about my feelings of Punjab and India.

After much delightful food and conversation, the party was wrapped.  The guests I met were so gracious and very sentimental about having to say goodbye.  Some families tried to convince me to come home with them. 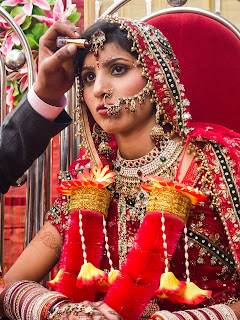 Just before the bride and groom were to take off in a rose covered SUV, I learned that their marriage was indeed arranged.  They might not have even met before that afternoon.  Tearfully, the bride shared partings with her likewise tearful family and friends.  She may have spent her whole life in a single place, and now she is to be married to a man in another village I don't know how far away with an entirely different family.  There were a few moments throughout the day I stole eye contact with the bride and I wished I could have read her face better.  Was there a greater share of joy or sadness under her fragile veil of composure?  She was so lovely.  I don't know if a woman can be lovelier than when in an Indian bridal gown.

Though if she can, I certainly want to see it.
Posted by Matteo Feo at 10:58 PM

Matthew, it's so nice to catch up on your travels. You got me a little choked up with this one. Miss you.

All is now right with the world. Sorry for my comment posting confusion.